Spruce Knob, topping out at 4,683 feet above sea level, is West Virginia’s highest peak. That’s what it’s most known for in the state, but few people know it is also the highest point of the Allegheny Mountains and the Appalachian Plateau. Not to mention, it is one of the most isolated peaks in the entire United States.

These designations may come as a surprise to those who are used to the elevation of mountains in the western U.S. where it’s not uncommon for peaks to reach 12 to 15,000 feet. In comparison, a peak less than 5,000 feet seems inconsequential, but Spruce Knob is anything but that.

The high point of West Virginia was formed around 480 million years ago when Pangea, the supercontinent single landmass on earth started to shift. During that shift, the Appalachian Mountain Range rose up during the collision of the earth’s massive plates. This formation happened hundreds of millions of years before the mountain ranges of the western U.S. formed. That means Spruce Knob and the surrounding ranges once stood as tall as the ranges of the west, but they have been beaten down over millennia.

Visitors to Spruce Knob can still see evidence of the dramatic seismic activity that formed the region in the giant boulders and scree fields that litter the high elevation landscape surrounding the knob. And while it has been millions of years since the plates beneath these mountains have shifted, there’s still plenty of dramatic weather to experience any time of year. The red spruce trees from which the area takes its name show the harsh effects of the wind, ice, and snow that batter the land. The trees have been deformed by the constant winds. They bend crookedly along the rocky ledges and grow limbs only on one side of their craggy trunks. Low growing blueberry and huckleberry bushes, commonly found in the colder areas of the northeast U.S., are found abundantly around Spruce Knob.

Spruce Knob itself is located within the Spruce Knob-Seneca Rocks National Recreation Area within the Monongahela National Forest. This recreation area was the first designated by the U.S. Forest Service in 1965 and comprises more than 100,000 acres. In total, there are 75 miles of trail to explore around Spruce Knob. Backpackers enjoy weeklong excursions in the Spruce Knob backcountry; though inexperienced campers unfamiliar with bear encounters, unexpected extreme weather should be cautious before making a trip.

The high point of Spruce Knob can be accessed via car. A stone and steel observation tower 900 feet from the parking lot offers a sweeping view of the mountains, valleys, and meadows that stretch for miles in every direction. Although, adventurers may opt for a more circuitous route to the top via one of several trails that encircle and lead to the knob.

Whispering Spruce Trail is a popular half-mile loop around the knob that features panoramic views and interpretive signage about the region’s plants, animals, and geology.

Beyond trails, nearby Spruce Knob Lake beckons visitors to spend an afternoon fishing or boating. Trout are abundant in this 25-acre lake, and a boat ramp permits access to electric trolling boats and non-motorized boats. The lake is open to the public May through October, but be aware, swimming is not allowed.

Forty-two campsites adjacent to Spruce Knob Lake offer picturesque views of the surrounding ranges from beneath a hardwood tree canopy. Only tent camping is permitted and bringing firewood from outside the area is strictly prohibited to protect the pristine stand of spruce from destructive species. 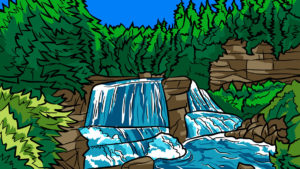